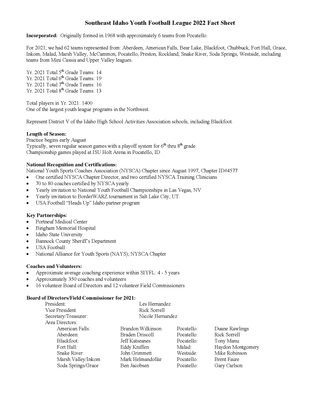 With more than 1,300 players currently registered and 60 teams, the SIYFL has expanded into one of the largest youth football programs in the state. The SIYFL no longer just serves the city of Pocatello but has now expanded to include a total of 14 different communities throughout southeast Idaho .

Please click here see the 2022 Fact Sheet, or click on the image below for a quick view of the page.

Les Hernandez has a long and storied history with the Southeast Idaho Youth Football League. Read below about how this tireless commissioner has worked for the sole benefit of his players and coaches.

“We've really had a huge growth spurt the last 10 years. Since 1999, the league has almost doubled. We've seen a large uptick in registration at the flag football division, the lowest division, which is very encouraging to see,” describes Hernandez.

Part of the recent growth and success of the league has been due to the strengthening of ties with the local high schools and parks boards.

“We work really closely with all the local high schools. We share practice and game fields. The high school coaches have really made it a point of emphasis in helping training players. For example, in the summer, along with a number of different high school coaches, we hold a summer camp for all kids to learn the fundamentals of the game,” explains Hernandez.

The unique partnership with the Idaho State University has allowed the SIFYL access to Holt Arena, an indoor football stadium.

POCATELLO , IDAHO - - With its long standing tradition, the Southeast Idaho Youth Football League (SIYFL) has become almost an institution in the Pocatello area. Serving the youth of the city of Pocatello for the better part of 40 years, the SIYFL continues to build on its tradition and has even seen tremendous growth over the past 10 years.

“I was watching my brother play, and his coach wasn't very dedicated. I signed up to coach and the rest is history,” says Hernandez. Les began his tenure as president in 1994, while continuing his coaching duties. His wife, Nicole, has served as league secretary and treasurer since 1994 as well.

The SIYFL was started in 1968 under the name Pocatello Little League Football. It started with six teams in total. Football has always been a popular sport in Pocatello , especially on Saturdays when the Idaho State University football team would suit up and play home games there.

“We're one of the few programs in the country that have access to a state of the art indoor turf stadium. We play our championships at the end of the season there and we have access to the speaker system and use announcers. It's really a treat and a fun place for the kids to play in to close out the season,” describes Hernandez.

The increase in numbers has also led to success and recognition on a national level as well. “Our teams have been participating at the Las Vegas Championships every year for the past 12-13 years,” states Hernandez.

Perhaps the biggest positive impact has been realized through the investment in coaching training, according to Hernandez.

“We've put a lot of effort into educating and certifying our coaches. Since joining the National Youth Sports Coaches Association (NYSCA) in 1997, we've certified hundreds of our coaches,” says Hernandez adding, “it has really helped us attract and retain our best coaches.”

As the league has grown so rapidly over the past 10 years, planning for the future is the number one priority according to Hernandez, “We're doing well now, but in anticipating future growth, we're trying to secure 25 acres in the Pocatello area to build more fields for practices and games.”

Coaching education continues to be an area of constant improvement as well according to Hernandez.

“We continue to work with the NYSCA to improve our coaching education programs. We try to make sure that the coaches that we have are the right ones for the job,” he said.

While there are many volunteers that help make the SIYFL the success that it has become, Hernandez pointed out a couple that have gone above and beyond in Tony Manu and Rick Sorrell.

“Tony played college football at ISU and played professionally for the Rams. He's been with us as a coach now for many years at all levels. Rick has also been a coach for many years and has served on the board in variety of roles. He has been my right-hand man now for many years,” Hernandez said. “I would be remiss if I didn't mention my wife, Nicole. Not only has she been so supportive of me as a coach, but she's served as secretary and treasurer for over a decade.”

“He's excited as am I. I've coached for almost 20 years and it will be a joy to coach him finally,” says Hernandez.

What has kept Hernandez involved over the past 20 years is the personal passion he has for youth development, “For me, it's all about watching kids develop. I still get wedding invitations and baby announcements from former players and that makes me happy. I love seeing former players come back to the practice fields to talk to the new players. It's really a labor of love for me.”

It's really a labor of love for me.”